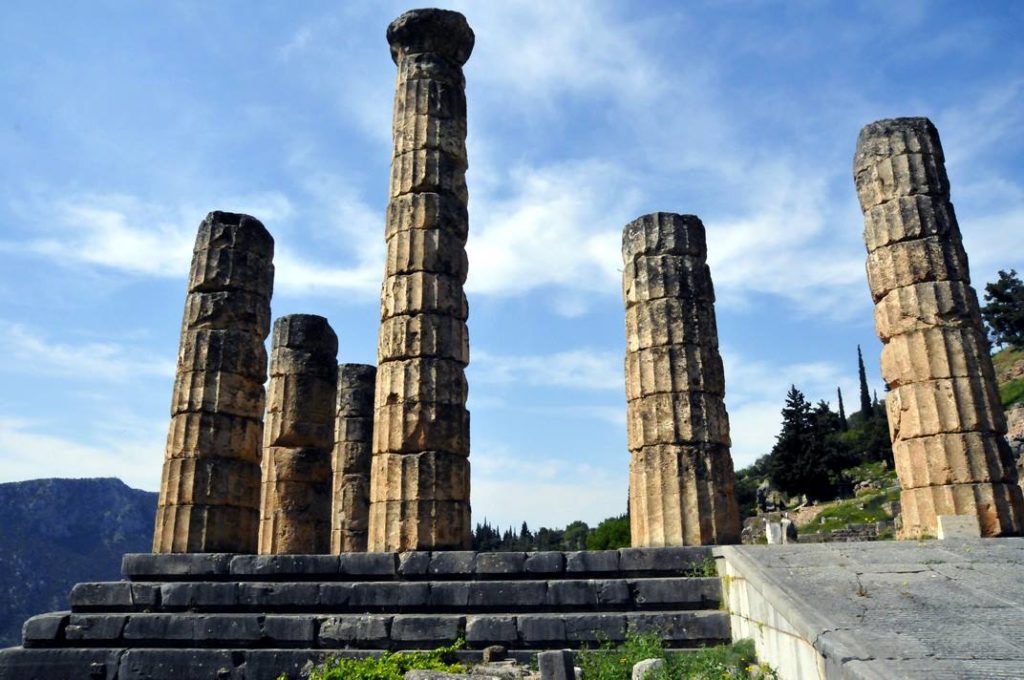 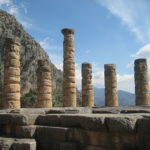 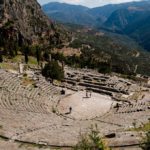 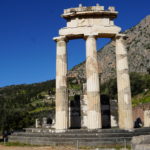 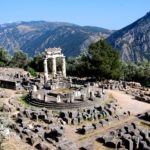 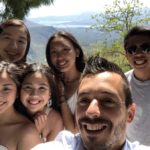 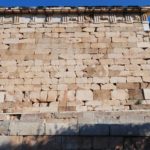 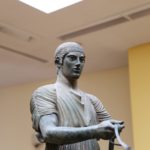 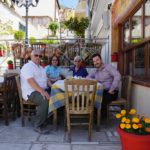 This is a great opportunity to visit one of the most renowned sites in Greece in one day. The Delphi day tour starts with a drive on the national highway towards northern Greece passing by the plane of Thieves and the city of Levadia. Then we will be on the slopes of Mount Parnassus before reaching Delphi. Our first stop is going to be the monastery of Hosios Loukas, which represents the second golden age of Byzantine art (11th -12th century) in particular its golden mosaic decoration and fine architecture.

After spending some time in this area of serenity we will drive to the site of Delphi, an ancient Greek sanctuary with a PanHellenic character dedicated to the God Apollo. It functioned as an Oracle and was considered ‘the naval’, the center of the world and is today a symbol of Greek cultural unity. The scenic location allows you to have a view of the Greek mountains and two more sites the Gymnasium and the secondary sanctuary of Athena Pronea. In the site, you will visit the Temple of Apollo where Pythia spoke to the oracles, the theater, and the stadium. While in the museum you will be able to see the famous charioteer and Gold Ivory statues.

After the site we will have our lunch at the modern village of Delphi with a view of the mountains of Fokis and our last destination will be the village of Arachova. A mountainous village built on a cliff 900 m above sea level very close to the Parnassus ski resort. It’s the mainland’s answer to Mykonos. After some free time for shopping and wandering around we will have a pleasant drive back to Athens. The World Heritage–listed monastery, Moni Osios Loukas, is 23 km southeast of Arahova, between the villages of Distomo and Kyriaki. The monastic complex includes two churches. Its principal church contains some of Greece’s finest Byzantine frescoes. Modest dress is required (no shorts). Nearby is the smaller 10th-century Agia Panagia (Church of the Virgin Mary). The monastery is dedicated to a local hermit who was canonized for his healing and prophetic powers.

The interior of the larger church, Agios Loukas, is a glorious symphony of marble and mosaics, with icons by Michael Damaskinos, the 16th-century Cretan painter. In the main body of the church, the light is partially blocked by the ornate marble window decorations, creating striking contrasts of light and shade. Walk around the corner to find several fine frescoes that brighten up the crypt where St Luke is buried.

Delphi was an important ancient Greek religious sanctuary sacred to the god Apollo. Located on Mt. Parnassus near the Gulf of Corinth, the sanctuary was home to the famous oracle of Apollo which gave cryptic predictions and guidance to both city-states and individuals. In addition, Delphi was also home to the PanHellenic Pythian Games.

The site was first settled in Mycenaean times in the late Bronze Age (1500-1100 BCE) but took on its religious significance from around 800 BCE. The original name of the sanctuary was Python after the snake which Apollo was believed to have killed there. Offerings at the site from this period include small clay statues (the earliest), bronze figurines, and richly decorated bronze tripods.

Delphi was also considered the center of the world, for in Greek mythology Zeus released two eagles, one to the east and another to the west, and Delphi was the point at which they met after encircling the world. This fact was represented by the omphalos (or navel); a dome-shaped stone which stood outside Apollo’s temple and which also marked the spot where Apollo killed the Python. The Oracle of Apollo at Delphi was famed throughout the Greek world and even beyond. The Oracle – the Pythia or priestess – would answer questions put to her by visitors wishing to be guided in their future actions. The whole process was a lengthy one, usually taking up a whole day and only carried out on specific days of the year. First, the priestess would perform various actions of purification such as washing in the nearby Castalian Spring, burning laurel leaves and drinking holy water. Next an animal – usually a goat – was sacrificed. The party seeking advice would then offer a pelanos – a sort of pie – before being allowed into the inner temple where the priestess resided and gave her pronouncements, possibly in a drug or natural gas-induced state of ecstasy.

Perhaps the most famous consultant of the Delphic oracle was Croesus, the fabulously rich King of Lydia who, when faced with a war against the Persians, asked the oracle’s advice. The Oracle stated that if Croesus went to war then a great empire would surely fall. Reassured by this, the king took on the mighty Cyrus. However, the Lydians were overpowered at Sardis and it was the Lydian empire which fell, a lesson that the oracle could easily be misinterpreted by the unwise or over-confident.

Delphi, as with the other major religious sites of Olympia, Nemea, and Isthmia, held games to honor various gods of the Greek religion. The Pythian Games of Delphi began sometime between 591 and 585 BCE and were initially held every eight years, with the only event being a musical competition where solo singers accompanied themselves on a kithara to sing a hymn to Apollo. Later, more musical contests and athletic events were added to the programme, and the games were held every four years with only the Olympic Games being more important. The principal prize for victors in the Games was a crown of laurel or bay leaves. The site and games were managed by the independent Delphic amphictiony – a council with representatives from various nearby city-states – which asked for taxes, collected offerings, invested in construction programmes, and even organized military campaigns in the Four Sacred Wars, fought to remedy sacrilegious acts against Apollo committed by the states of Crisa, Phocis, and Amphissa.

The first temple in the area was built in the 7th century BCE and was a replacement for less substantial buildings of worship which had stood before it. The focal point of the sanctuary, the Doric temple of Apollo, was unfortunately destroyed by fire in 548 BCE. A second temple, again Doric in style, was completed in 510 BCE. Measuring some 60 by 24 meters, the facade had six columns whilst the sides had 15. This temple was destroyed by the earthquake in 373 BCE and was replaced by a similarly sized temple in 330 BCE. This was constructed of porous stone coated in stucco. Marble sculpture was also added as decoration along with Persian shields taken at the Battle of Marathon. This is the temple which survives, although only partially, today.

Other notable constructions were the theatre (with capacity for 5,000 spectators), temples to Athena (4th century BCE), a tholos with 13 Doric columns ( 580 BCE), stoas, a stadium (with capacity for 7,000 spectators), and around 20 treasuries, which were constructed to house the votive offerings and dedications from city-states all over Greece. Similarly, monuments were also erected to commemorate military victories and other important events. For example, the Spartan general Lysander erected a monument to celebrate his victory over Athens at Aegospotami. Other notable monuments were the great bronze Bull of Corcyra (580 BCE), the ten statues of the kings of Argos (369 BCE), a gold four-horse chariot offered by Rhodes, and a huge bronze statue of the Trojan Horse offered by the Argives (413 BCE). Lining the sacred way, from the sanctuary gate up to the temple of Apollo, the visitor must have been greatly impressed by the artistic and literal wealth on display. Alas, in most cases, only the monumental pedestals survive of these great statues, silent witnesses to a lost grandeur.

In 480 BCE the Persians attacked the sanctuary and in 279 BCE the sanctuary was attacked again, this time by the Gauls. During the 3rd century BCE, the site came under the control of the Aitolian League. In 191 BCE Delphi passed into Roman hands; however, the sanctuary and the games continued to be culturally important in Roman times, in particular under Hadrian. The decree by Theodosius in 393 CE to close all pagan sanctuaries resulted in Delphi’s gradual decline. A Christian community dwelt at the site for several centuries until its final abandonment in the 7th century CE.

The site was ‘rediscovered’ with the first modern excavations being carried out in 1880 CE by a team of French archaeologists. Notable finds were splendid metope sculptures from the treasury of the Athenians (490 BCE) and the Siphnians (525 BCE) depicting scenes from Greek mythology.  In addition, a bronze charioteer in the severe style (480-460 BCE), the marble Sphinx of the Naxians (560 BCE), the twin marble archaic statues – the kouroi of Argos (580 BCE) and the richly decorated omphalos stone (330 BCE) – all survive as testimony to the cultural and artistic wealth that Delphi had once enjoyed.